You are here: Home / Books, Media & Entertainment / Embers of Destruction Completes the Mysteries of Cove Trilogy

Embers of Destruction Completes the Mysteries of Cove Trilogy 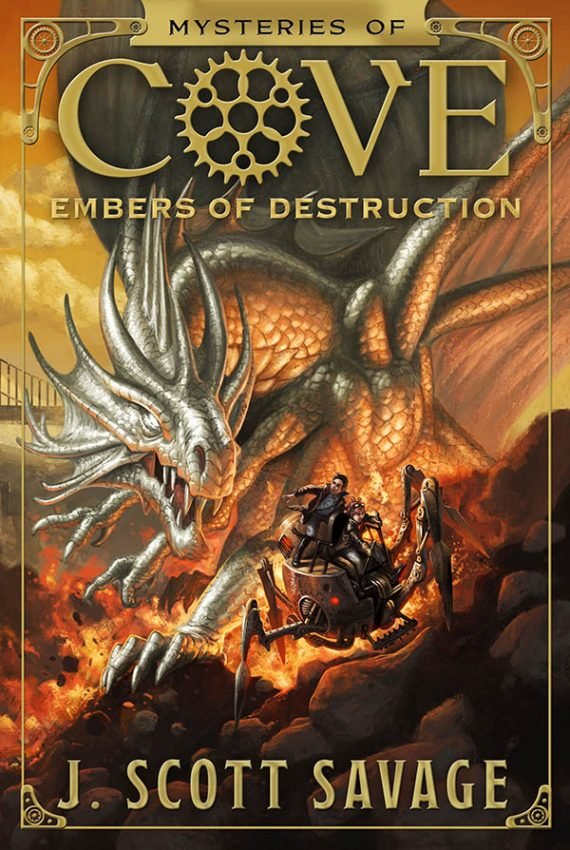 In the third and final volume of the bestselling Mysteries of Cove series, Trenton and Kallista–along with their friends, Plucky, Simoni, Angus, and Clyde–fly their mechanical dragons south toward San Francisco, looking to rescue any survivors from the battle of Seattle.

Arriving in San Francisco and investigating the area in secret, the young riders are reunited with Kallista’s father, Leo Babbage, who reveals that the humans in the city are working as slaves to the dragons, but that they don’t want to be rescued–himself included. He says they are being protected by their new master: a huge, powerful white dragon who lives in an impenetrable tower fortress overlooking the city. Kallista is stunned by the news. Why would her father ever willingly want to work for dragons?

Trenton and his friends are confronted by the guards and their mechanical dragons are seized. Evading capture, the young riders escape and begin looking for a way to break the white dragon’s hold over the city–and over Leo. Working with the kids from the city, the young riders track down the source of the dragon’s power to an underground chamber that is accessible only through an underwater passageway below the tower fortress.

With the white dragon watching their every move, Trenton and Kallista will need every bit of creativity and ingenuity they can manage to find a way to retrieve their stolen dragons, enter the tower fortress, and take down the dragons once and for all.

Mysteries of Cove: Embers of Destruction by J. Scott Savage, the final installment in the Mysteries of Cove series, is even more compelling than the first two. Trenton and Kallista, along with four of their compatriots have returned to continue the search for Kallista’s father, this time traveling from Seattle to San Francisco. Like the first two books, this one is also filled with unpredictable plot twists and action. I really had no idea where this book was headed until I got to the end. Let’s just say this author isn’t in the habit of wrapping everything up neatly with a big pretty bow.

As in the previous installments of this series, his writing style is very visual, and he paints pictures so vividly with his descriptions that you can “see” the story as you read. I still think these books would make great movies. And while they are targeted to the middle-grade readers, they would easily hold the attention of teens and even young adult readers.

Now that all three books are available, if you haven’t already enjoyed the first two, the trilogy would make an excellent gift for your favorite fantasy/adventure/steampunk reader of any age.

Mysteries of Cove: Embers of Destruction is available from Amazon.com in Hardcover, Kindle and Audio CD editions (and you’ll find the first two there as well).

Harriet Beecher Stowe is “All That Makes Life Bright” — Book Review
Next Post:Mustaches for Maddie Encourages Compassion and Courage