In case you haven’t noticed, tomorrow is St. Patrick’s Day.  And despite the fact that the Irish aren’t exactly known for their cuisine (corned beef isn’t really an Irish dish–that’s an American invention, though favored by the Irish in America),  they do have some highlights.

I don’t do a lot of Irish cooking because it seems that a very large percentage of the Irish cookbooks I have seem to favor Guinness, stout or whiskey and I don’t drink.  I also don’t cook with alcohol (other than extracts). 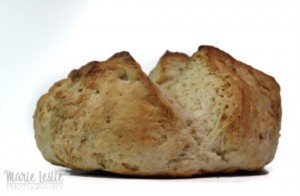 First, a few things to know about soda bread:

Soda bread is a very simple quick bread.  It has only a very few ingredients, which makes sense considering the economic status of the Irish countryside in the 19th century.  It became a staple of the Irish diet in the mid-1800’s when baking soda became available and worked well with the “soft” wheat of Ireland.

Sift dry ingredients into a mixing bowl, then add the milk, mixing to form a firm, but not too stiff, dough.  Knead lightly on a floured board and form into a slightly flattened round.  Cut a deep cross in the top and brush the top with milk.

Place on a lightly greased and floured baking sheet and bake in the center of the oven at 425 for 30-40 minutes.  The loaf is done when it’s golden brown and sounds hollow when tapped on the base.

Cool on a wire cooling rack.  If it is too crusty, wrap in a barely damp towel.  Eat within a day or two. 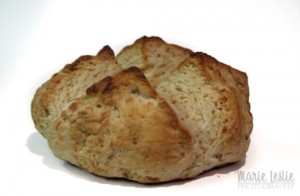 Be sure to check our recipe for Blarney Stones.  Definitely not Irish, but delicious and adorable–and green!

Category: Food and CookingTag: Holidays
Previous Post:How to Plan your Wedding & Still Afford Your Honeymoon
Next Post:Do the Spring Fling–Decluttering