The Golden Plates, by Michael and Laura Allred, and Andrew Knaupp, is an illustrated adaptation of The Book of Mormon: Another Testament of Jesus Christ, which has sold over 120 million copies, and ranks as the fifth bestselling book of all time. This graphic novel/comic book adaptation was first created in 2005 by award winning artist Michael Allred. The Premium Edition has replaced the full text originally included in the first edition with simplified and edited text, making the story easier for younger readers to follow and also showcasing more of the stunning artwork. It has also been converted to digital form for enjoyment on phones, tablets, and desktop devices through Amazon, iTunes, and Kobo. New printed editions have also been released through Amazon.

The first 6 issues cover the first 145 pages (27%) of the Book of Mormon, from 1st Nephi through the Words of Mormon. This adaptation is a fun and enthralling to way to help older children and teens understand and enjoy the Book of Mormon in a format more advanced than simplified children’s stories or scripture readers meant for young children. 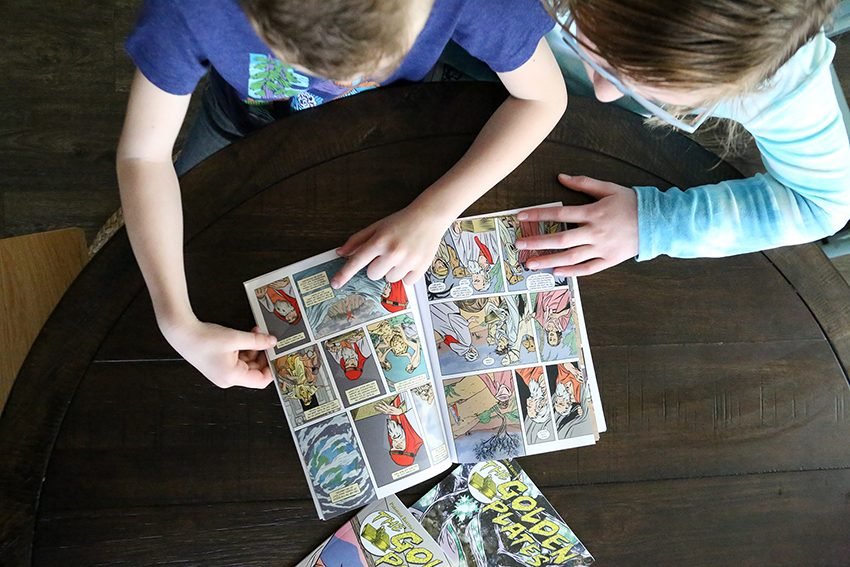 I received the first six issues of The Golden Plates to review. Issue 1 was paperback and the other five issues were digital versions. The artwork in these graphic novels is excellent, and the important points of each story from the Book of Mormon are faithfully represented. For younger readers, and for those with reading challenges, this is definitely a less overwhelming and more understandable way to begin learning The Book of Mormon.

My challenged reader tells me she would be more likely to pick up one of these than the original text. They invite engagement. Some older readers may wish to compare them with the graphically illustrated Book of Mormon Stories; however, these books have a more contemporary feel in their artwork. Because each issue of The Golden Plates is a separate book, it is also easier for small hands to manage, and easier to tote than a larger, heavier book. I am looking forward to future issues covering the rest of The Book of Mormon (hint, hint) so I can have a complete collection.

These will definitely be on my gifting list (yes, this WordNerd loves to gift books), and would be an excellent addition to any LDS family library.

The Golden Plates Graphic Novels are available at Amazon.com

Kiss of the Spindle #Review
Next Post:20 Great Podcasts to Inspire Your Creativity