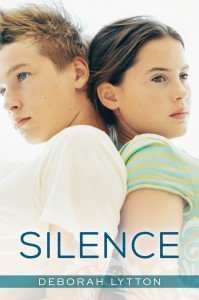 Silence by Deborah Lytton, is the story of Stella, a girl with an amazing voice who was born to sing and has dreams of Broadway. It is also the story of Hayden, a boy who stutters and rarely speaks.

Stella decides to try out for the school play. She knows it’s a long shot because she’s only a sophomore and seniors always get the best roles. But she does it anyway and much to her surprise wins the role of Maria in West Side Story.

Music is Stella’s life. She says, “I am quiet and unheard. . . . Except when I sing. My voice reaches out to the world because in those moments, I can fly. . . .When I sing, I’m not longer invisible. I’m no longer the fifteen-year-old who never raises her hand in class, who only has one friend and never volunteers to be first for anything. When I sing. . . I believe anything is possible. Miracles can happen.”

Hayden plays the piano for the musical. And in classical novel fashion, there is an instant connection. Although Stella and Hayden don’t talk to each other and Stella tries to ignore it in the beginning, it is there.

The night before the play opens she agrees to go to a party with her best friend Lily, even though she has some misgivings. Stella is not comfortable at the party but, like most teens, doesn’t leave. During the course of the party there is some typical teenage horseplay, but it doesn’t end typically. Stella is caught in the middle and accidentally pushed. She falls, hitting her head on the concrete and then tumbling into the pool, where she is rescued by Hayden.

When she awakes in the hospital, things are fuzzy, but quickly she realizes she can’t hear anything. At that moment she doesn’t know whether it is temporary or permanent.

Of course the first thing that happens is that because she is in the hospital, she cannot be in the play and misses out on that, which is heartbreaking for her. They quickly come to realize there is nothing they can do to restore her hearing. The effects of the injury are permanent. However, a cochlear implant may be a possibility.

And this is where the real story begins.

With the help of Hayden, Stella begins to explore what this means for her future. And as she struggles with understanding—and with being understood—because of course, what happens when the rug is pulled out from under your life? What happens when your very ability to communicate is taken away?

As Hayden helps Stella come to terms with her loss and helps her understand it doesn’t mean a complete loss of her life and life can still be good even when it takes a sudden left turn. We also begin to know his story and how this time not only begins to heal her, but also him.

And then there is an important decision to be made that will affect the rest of her life, her relationship with Hayden and with her family, and comes to realize what’s most important in her life, what she values most and who she wants to be.

The story drew me in right away. The characters were well-rounded and felt “real.” Events unfolded in a natural way and the story felt true to its teenage voice. I also liked the way the relationship between Stella and Hayden unfolded and that the focus of the book was on the emotional relationship and not a physical one.

This is definitely a novel I have encouraged my teenage daughters to read. The message is strong without feeling preachy. The characters resonate and are relatable. And the story is strong and uplifting.

You can find Silence by Deborah Lytton in Hardcover, Kindle or Audio CD at Amazon.com.

A copy of this book was provided to me for review and my opinions are always just mine.